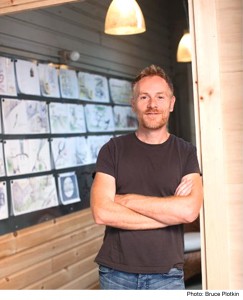 Matt Davies is the Pulitzer Prize-winning editorial cartoonist for Universal Press (UClick), Remapping Debate.org, and The Hearst Newspaper Group, based in Connecticut.

Born in London, England in 1966, Davies moved to the U.S. in 1983. He studied Illustration and fine art at both The Savannah College of Art & Design (GA) and The School of Visual Arts in New York City. He began drawing editorial cartoons full-time for The Journal News in Westchester County (NY) in 1993, and in 2009 started drawing for Hearst.

Matt received the Pulitzer for editorial cartoons in 2004, the same year that he won the inaugural Herblock Prize. He was awarded the Robert F. Kennedy Journalism Award in 2001 for a collection of his work highlighting such subjects as police brutality, racism and school overcrowding. He is a five-time winner of the Society of Professional Journalists (New York Chapter) Deadline Club Award – including the 2001 prize for his work confronting a post 9/11 New York – and has been honored for his local cartoons with five first place awards in the New York Associated Press Editorial Cartooning Competition.

Matt was also again a Pulitzer Finalist in 2011.

His cartoons are widely syndicated by Universal and have appeared frequently in The New York Times, The Washington Post, The Los Angeles Times & USA Today. His work has also been featured in Newsweek, Time Magazine, U.S. News and World Report, CNN and Mad Magazine.

Davies has given talks about cartooning and politics at many venues including the UN, The Library of Congress, The National Press Club in Washington DC, Columbia University, The British Library in London, The National Archives in Washington DC and The TriBeca Film Festival. He was also the 2004 Writer-in-Residence with the Journalism and Art departments at the University of Wisconsin-Madison, and is on the advisory board of the National Cartoon Museum.

3 Responses to About Matt